An introduction to cavity wall insulation

What is cavity wall insulation?

Properties built since the 1930s usually have cavity walls. These are built from two layers – or ‘skins’ – of bricks, with an air gap between them. This air gap – or cavity as it is more commonly known – was introduced in an effort to reduce damp and condensation on internal walls.

During the 1970s there was a worldwide energy crisis where many industrial countries struggled for supplies of oil and gas, so there was a sudden spike in energy prices. One of the results of this was a massive push towards energy efficiency and as such this air space within the cavity walls suddenly fulfilled a further purpose – a space to house insulation!

It is possible to both insulate existing cavity walls by injecting them with insulation as well as new cavity walls (the insulation is positioned within the cavity during the construction phase).

Since new build cavity walls must be built with insulation and government grants have encouraged retrofitting, it’s pretty rare these days to find a house which hasn’t had cavity wall insulation installed. It has been popular for years due to its low cost and the ease with which it can be installed. 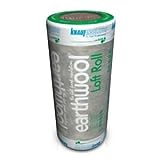 Knauf Earthwool Loft Roll Insulation | 100 mm (8.30m2 per roll)
Price: £29.73
With up to 35% of heat lost through external walls, insulating a cavity wall helps to provide a thermal barrier, considerably slowing heat transfer. This means less heating is needed to keep the house at the required temperature. In the summer, the reverse happens; hot air outside the home can’t get in as easily, which means you don’t need to use energy to keep the home cool. Therefore, cavity wall insulation can make a difference to your energy bills all year round.

What materials are used for cavity wall insulation?

Modern cavity walled properties are built with insulation already in place, usually rigid board insulation. When insulation is retrofitted in an older property, the options are fiberglass-type insulation or polystyrene bead insulation, which is more expensive but has a higher performance.

Polystyrene beads are a great insulator and they spread out to fill the cavity and they won’t leave gaps, unlike wool can – the beads are injected with a glue that binds them together once situated in the wall.

One advantage of foam insulation is that it can be used for narrow cavities, and smaller holes (8mm) will be drilled into the brickwork. Unfortunately, older styles of foam insulation degrade over time and can give off gases. Modern versions do not have this problem. However, it can be expensive and installers may be difficult to find because it is the installation process is trickier.

Mineral wool consists of granulated spun glass or rock wool. A plus is that it’s non-combustible but it can clump together resulting in uneven distribution within the cavity wall – potentially resulting in cold spots.

How is cavity wall insulation installed?

Retrofitting cavity wall insulation only takes a few hours on an average house. The gap between the bricks is filled with one of several different insulating materials. Small holes are drilled in the brickwork and the wall is then injected with the material of your choice.

Is my home suitable for cavity wall insulation?

The best way to tell if your wall has a cavity is to look at exposed brickwork. If the wall only has stretcher bricks, (i.e. the bricks are all uniform and look the same length) then it is likely that you have cavity walls. If you can also see half bricks, it’s a solid wall (in which case, you could consider external wall insulation). Not all cavity walls are suitable for insulating, however.

You should have a pre-installation survey to look for any existing defects such as damaged pointing or debris in the cavity. These could encourage damp and cavity wall insulation should not be installed until these problems are rectified. Another point of consideration is whether or not the property is regularly exposed to wind-driven rain. Get a trustworthy assessor to have a look before starting any work– and if you’re not convinced, get a second opinion!

Are there any downsides of cavity wall insulation?

It can encourage damp by allowing rainwater to track along the cavity. However this depends on the property and the insulating material. If your home has no underlying structural problems and you’ve had the work installed by a good worksman then you should be fine.

How much does cavity wall insulation cost?

Whitewool costs around £7 per square metre, beads around £9 per metre squared. It could save on average around £300 a year. This means with most properties it will pay for itself within two years.

Are there any grants or funding for cavity wall insulation?

Yes! Some people are eligible for free cavity wall insulation due to new government funding.

If you’d like a quote for cavity wall insulation, just fill in the form below and one of our GreenAge-approved contractors will be in touch shortly.

Need cavity wall insulation? We have scoured the country for the best tradespeople, so that we can make sure we only recommend those we really trust.

If you would like us to find you a local insulation installer, just fill in the form below and we will be in touch shortly! How an Energy Efficient Home Can Save You Money