You may have heard on the radio and TV that the government is really ramping up its smart meter roll-out. To date, approximately 3.3m smart meters have been installed, but the government has plans to get them in every home by the end of 2020.

The theory behind them is sound; the meters allow the energy companies to accurately measure how much energy is being used. They therefore only bill you for what you use, meaning no more estimated readings.

Smart meters should also allow the household to better gauge their usage and therefore take energy saving actions as a result. The energy companies providing the smart meters also provide a physical unit that sits in the house (known as an In Home Display or IHD) to make checking energy usage that little bit easier.

Time of use tariffs

Smart meters actually have another advantage seldom reported – all to do with time of use tariffs. At the moment, the most complicated energy tariff available in the UK is the Economy 7 tariff, which allows people to draw electricity at two different rates depending on the time they use the electricity.

The Economy 7 tariff came about because the UK had large power plants that couldn’t be turned on and off like today’s gas plants. These tended to be nuclear and coal plants which would produce electricity 24/7, so in an effort to increase demand during the middle of the night they charged less for it.

The reason this could be a game charger is the ability to dampen peak demand – by making traditional peak demand electricity prohibitively expensive, many consumers will avoid running items at that time. What this means is that the UK won’t require as much installed capacity – so less spend on new power plant infrastructure.

Are smart meters all they’re cracked up to be? 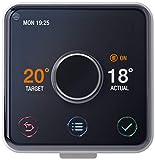 -25%
Hive Active Heating and Hot Water Thermostat Without Professional Installation-Works with Amazon Alexa
Price: £134.99
Was: £179.00
So, despite the fact smart meters are important to our future and the fact they have clear advantages for consumers, some have reservations – why has only one of us in the office made the switch and had a smart meter installed? Well the reason was highlighted by the Science and Technology Committee in an update they provided last month in the latest update on the smart meter rollout:
The Government has known for years that early smart meters can lose their smartness if the customer switches supplier. Ministers merely have an ‘ambition’ to fix this by 2020. Taxpayers will be unimpressed with this situation, and timely action is needed.

It is pretty incredible that a scheme that will end up costing £11bn was rolled out with the knowledge that early smart meters will require replacing to remain functional. Our recommendation is to wait until the proper roll-out takes place in the next few months – don’t jump the gun and become and early adopter with technology that could well be redundant as soon as you swap supplier! The Most Efficient Way to Use Central Heating How warm should my house be? Is it cheaper to leave your heating on all the time or turn it on and off?