The True Price of the Television I am a sucker for sport, be it the Winter Olympics, six-nations rugby or the climax of the Premier league. However, all of this has made me start to think about how much it actually costs me to watch TV. Having researched the topic I decided to pass on my knowledge to all of you who may be in similar positions – albeit maybe swapping match of the day for strictly come dancing.

If there is one thing to be cautious of, especially within the electronic gadgets and appliances section, it is the actual running cost compared to the sale price. As with many things, the initial cost of a product may not mean it turns out to be the cheapest option. In this blog I try and seek out the most efficient TVs available on the market, in order to help you save money on your electricity bills.

Does a modern TV use more electricity than my old CRT set?

It depends on the type of set, so there may be more reasons to change your TV than you knew. You might want the latest technology, a larger screen and the ability to watch everything in 3-D, however there are also hidden reasons as to why upgrading TVs could be the way forward. It has been proven that even a whopping 60+ inch LED uses half the amount of electricity than a 10-year-old CRT, of half the size, does.

What should I look for in a new TV?

It would seem foolish to purchase a TV for £100, only for it to cost a further £100 per year to run, when there could be a £200 TV that costs £30 a year. However, it may also be foolish to buy the £200 TV if it is of poor quality. While in the past it has been very difficult to reveal the true operational costs of electronic devices and gadgets, nowadays with the introduction of energy monitors and an increased focus on the environment, data is becoming a lot more accessible. For example we now know that the most efficient TVs out there, the LED TVs, are able to run on under £7 per year, depending on size of course.

So what are the options?

As previously discussed, the old CRT style television set is inefficient and it may be costing you large amounts of money to run. Therefore, even if you do not feel it necessary to upgrade to the latest definition for pure viewing quality, it may be worth your while doing it on a purely economic basis. However, the electrical consumption is quite often based on size as well. Therefore a CRT of about 32” will use the same amount as an LCD of around 42”.

Currently, the television sets that are available are LCD, Plasma and LED.

Plasma TVs are the least efficient of all. This is because they produce a lot of excess heat during the process of burning phosphors to display the picture. Therefore, when researching what the most efficient TV is, we would recommend ruling Plasma out of the equation. On the other hand their start off pricing is pretty reasonable, however the savings will be quickly drained through your electricity bill.

The most common panel used for televisions today is the LCD. These have a relatively low running cost compared with that of the Plasma, however are more expensive to power than LED TVs. Added negatives also include poor rending of blacks and ghost problems when displaying fast moving images.

LED backlit displays offer further efficiency to the viewer by using less electricity. They also tend to be thinner, added brightness and better contrast features.  You may have noticed the latest LED light bulb lighting popularity; this is because they use far less electricity while providing the same great result. This is similar to the LED TVs as they provide great results while costing very little to run. (Look out for OLED, or organic LEDs, which although expensive and extremely scarce, give the viewer an unforgettable experience, both in terms of cheap running costs and picture quality.)

So what are the numbers involved?

I have taken a 32” TV from each of the categories and have compared their prices and running costs. (Averaging a few hours use per day for 10 years)

So what does it all mean?

Having now seen the average, both in terms of initial purchase and running costs, the topic suddenly becomes a lot clearer.

The Plasma comes out as the most expensive to run; however they are becoming increasingly cheaper to buy.

The CRT, while cheap due to the lack of popularity, has a very expensive lifetime running cost. It also has the negative ‘large back-end feature’. 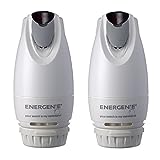 -49%
Energenie MIHO013-2 2 Pack Smart Radiator Valves, White
Price: £53.99
Was: £104.99
With the LCD, you’re getting a pretty good combination between lifetime running cost and initial purchase price, this has explained why they are arguably the most popular TV out there.

However, the lifetime running costs of LED backlit TVs are the lowest of them all. While the difference in purchase price and running cost make the LCD, on average, a more economically sensible TV, the LED, throughout its lifespan will use less electricity and provide a slightly better picture quality. This therefore means that for TheGreenAge, with our high regard for efficiency as well as quality, we put the LED TV as our winner.

So what will I go for?